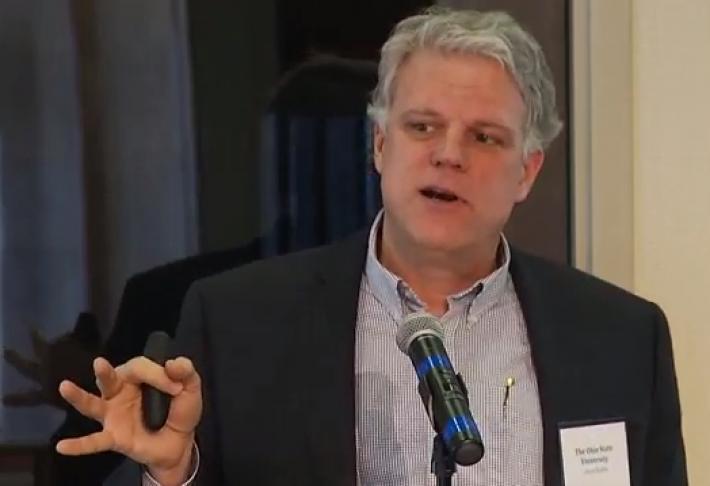 COLUMBUS, Ohio (July 8, 2015) – Twoteams from The Ohio State University were among eight chosen from around the state to participate in an innovative new program designed to turn universityresearch into commercial products.

The I-Corps@Ohio (short for Innovation Corps) is a new seven-week program that aims to help the chosen faculty and student teams determine if their intellectual property – such as a new technology – could be the basis of a startup company.

“The ultimate goal is to help the amazing technologies that are developed at colleges and universities in Ohio to move out of the lab and into the marketplace,” said Michael Camp, who is executive director of The Technology Entrepreneurship and Commercialization (TEC) Institute at Ohio State, and who is serving as program director for the I-Corps@Ohio program.

“We want to increase innovation and entrepreneurship among our faculty and students and help them build their business acumen and contacts with industry.”

I-Corps@Ohio is modeled after and approved by the National Science Foundation’s successful I-Corps program. Ohio is the first to have a statewide collaboration based on the NSF model, but fully funded by the state. The program is funded and supported by the Ohio Department of Higher Education(formerly the Ohio Board of Regents).

“I want to congratulate our participating universities for taking this first step toward better commercializing our research,” said Ohio Department of Higher Education Chancellor John Carey. “This program builds upon the work that was put into our Condition Reports, and I look forward to seeing the results of their efforts.”

Governor John R. Kasich has identified research commercialization as a prime factor in sustaining job creation and has stressed to Ohio’s college and university presidents and boards of trustees that the issue must be among their top priorities.

The two teams from Ohio State chosen to be part of the first I-Corps@Ohio cohort are led by:

Of the other six winning teams, five are from the University of Akron and one is from Case Western Reserve University.

Ohio State is the lead administrator and will organize and facilitate the program. All the instructors for the program will be certified by the NSF I-Corps.

The program is open to teams from all Ohio universities, colleges and community colleges.

The first eight winning teams were chosen from among about 40 applications by an independent committee that was appointed by the six founding institutions. Each winning team will receive up to $15,000 in funding. Teams will convene at Ohio State July 21 for the program, which will run through Sept. 3.

In addition to the faculty lead, each team will have an entrepreneurial lead, usually a student, and an executive mentor, who will be an experienced or emerging entrepreneur with real-world experience.

During the program, each team will do a rigorous analysis of its technology and market potential to see if it can be the basis of a startup company, Camp said. Among the tasks will be to interview potential customers to see if this technology really does answer a need that they have.

The teams should end the program knowing if their product has clear market viability, Camp said. If it does, they will have created a transition plan to move forward and made plans for a technology demonstration for potential investors and partners. A final report summarizing the lessons learned and the progress made is due eight weeks after the program ends.

“These teams are entering I-Corps@Ohio with phenomenal concepts. Some of these technologies may have been around for years, but the researchers just don’t know how to take them out of the lab,” Camp said.

“With the visionary support of the Ohio Department of Higher Education, we hope that we can help them create companies that will drive sustainable technology-based economic development in Ohio.”

And this first cohort is just the beginning, Camp said. The plan is to run two of these seven-week programs each year, with eight to 12 teams in each cohort.

“This is an exciting program,” Camp said. “I-Corps@Ohio represents a great opportunity to take the best technology created at Ohio universities and use it to accelerate the growth of income and jobs in the state.”

Original story by Jeff Grabmeier is available by clicking here.